Notably, in recent years, we focus on elucidation of anatomy and pathophysiology of fascia, ultrasound-guided fascia release (injection[hydrorelease], dry needling, manipulative therapy) and establishment of terminology of fascia and its related terms.

1.What is Non-surgical Orthopedics?

JNOS defines the term of non-surgical orthopedics as a field of medicine in which medical treatment and research of musculoskeletal pain and refractory pain with less invasive treatment as possible.

2.What is the definition of fascia

The definition of fascia is under international debate. For recent examples;

Today, 2 types of definitions, “A fascia” and “fascia system” are defined.

The reasons for being confused about the definition of fascia may be not to share the aspect of anatomical structural organization of human body as each level (below figure). 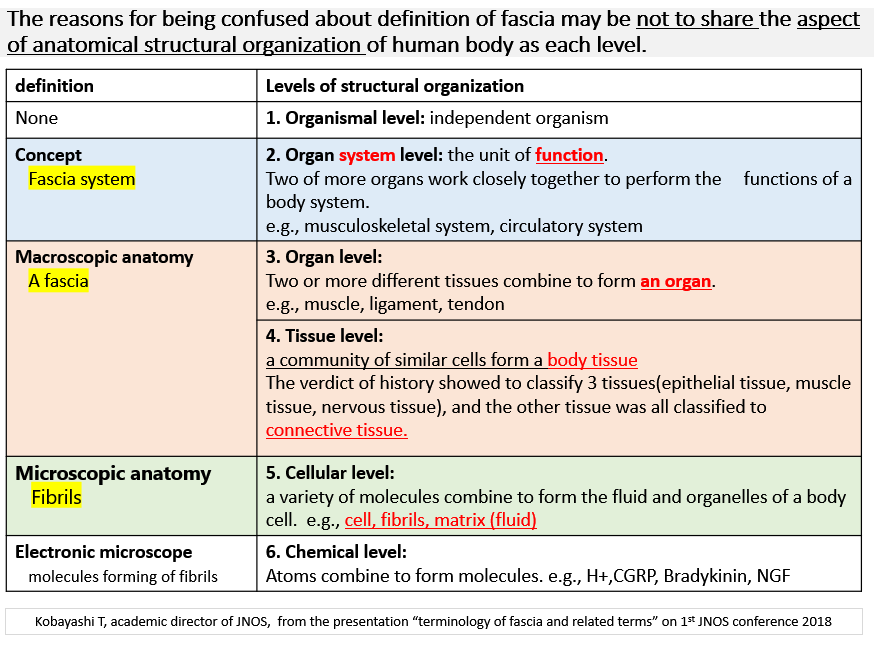 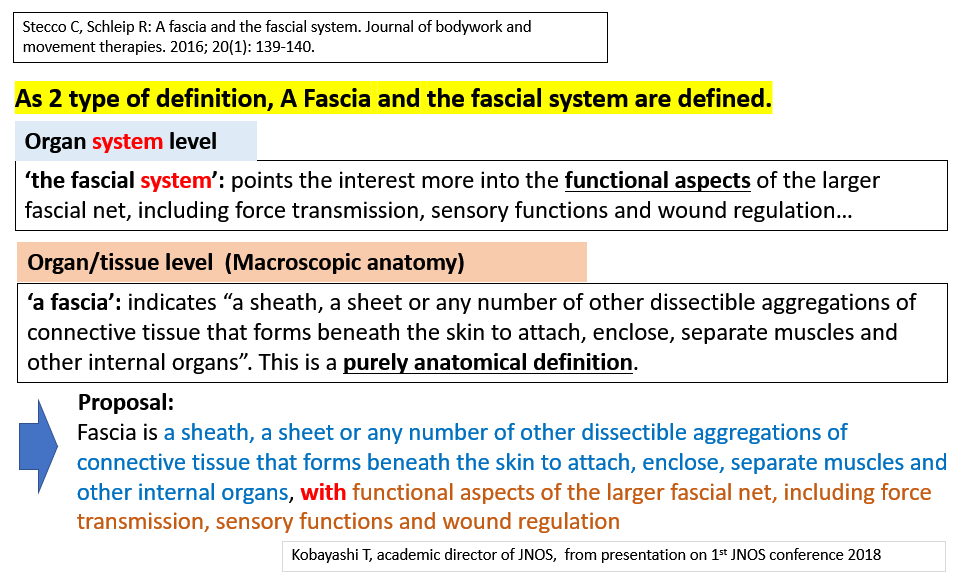 As the term of fascia, JNOS proposal for the new definition: “Macroscopic anatomical structures forming of fibers with the function of fascial network system (Terminology of JNOS, 1st edition, 2019 Mar)”: as each factor;

As the anatomy of fascia: macroscopic anatomical structures forming of fibrils

3.What are abnormal fasciae which cause any symptoms?

The sensory, motor, and autonomic symptoms caused by abnormal fascia. The specific fascia and a fascial group that causes the symptoms should be identified.

This classification criterion is made available when one or more apparent abnormal fascia is identified, which cannot be explained by another diagnosis. FPS is classified when all essential criteria are fulfilled and at least one more confirmatory observation is made. After FPS is classified, the precise intervention for abnormal fascia (e.g., ultrasound-guided intervention) is performed to relieve symptoms of FPS significantly (relief of restrictive range of motion and 75% or more of the pain intensity as per the criterion standard).

We here explain common words (It is planned to increase in the future).

In the case of fascia, especially deep fascia, which has a network structure as a three-dimensional structure between outer muscles, the term of “cohesion” could be more appropriate compared to that of “adhesion.”

In clinical practice, it is crucial to assess the precise identification of the source of pain and exacerbating factors associated with patients’ symptoms, and the sharing of assessments for interprofessional collaboration (below figure). 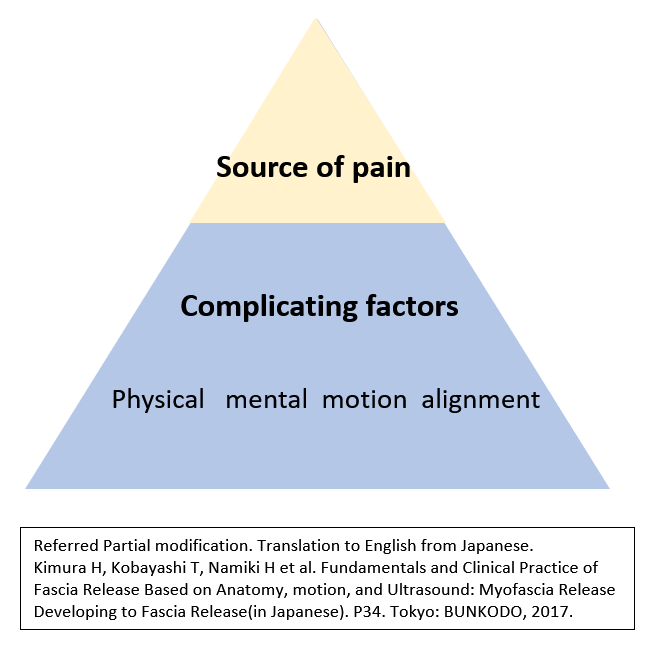 Physicians and therapists should be to perform a medical interview, physical examination (palpation, motion-analysis at pain motion, range of motion and special tests for orthopedic examination), and diagnostic imaging such as ultrasonography, based on various clinical methods including dermatomes and fasciatomes, pattern of referred pain, and clinical anatomy such as peripheral nerves (around/on/in them, e.g., perineurium, interfascicular epinerium, fibrils), vessels (around/on them), muscles (on/in them), tendons(on/in them), ligaments(on/in them), and fascia (including fibrils).

We have proposed methods for selection and combination, involving various therapeutic techniques such as physical therapy, dry needling, injections and less invasive surgery, based on pathophysiologic conditions (range of motion, adhesion/cohesion of fascia) and characteristics of interventions (invasiveness and treatment area) (Below figure). For instance, broad and weak fascial adhesions can be treated with physical therapy, and strong adhesions can be treated with injections. Furthermore, each treatment may be performed alternately or in sequence. 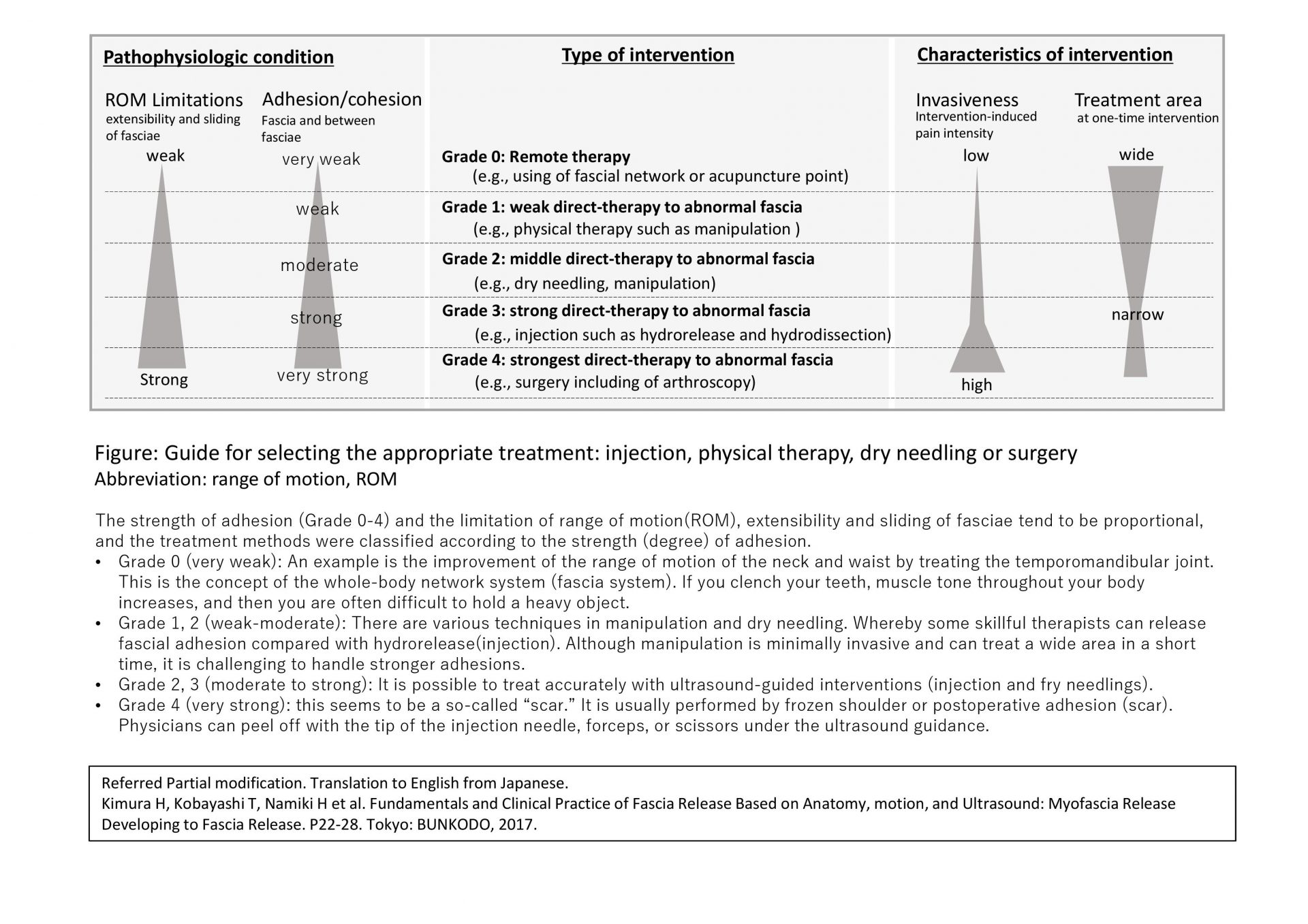 5-1 What is fascia hydrorelease?

In 2012, Kimura reported that the injection of physiological saline instead of a local anesthetic could relieve the symptoms caused by abnormal fascia (Kimura H. 2012. SUKIMA block (interfascial block) with physiological saline: new procedure for myofascial pain syndrome. In: 10th conference of Japanese Society for the Study of Myofascial Pain Syndrome).

In June 2014, Kimura devised a novel procedure termed “ultrasound-guided myofascial release injection”, which was defined as a technique for the release (separation in structural view and relaxation in functional view) of stacking fasciae as hyperechoic strip-shaped lesions on ultrasound images, akin to peeling off thin stacking papers and separating fasciae themselves (Kimura H. 2014. A new injection technique of ultrasound-guided myofascial release (in Japanese). In: 13th conference of Japanese Society for the study of Myofascial Pain Syndrome.).

The word “stacking” originates from polyacrylamide gel electrophoresis. This injection aims to improve the extensibility of fasciae or to slide between fasciae in addition to having analgesic effects.

In 2015, the target of treatment expanded from myofascia to fascia (including deep fascia, myofascia, paraneural sheath, tendon, ligament, retinaculum, and fat pad) (Kimura H. 2015. Myofascial release developing to fascial release (in Japanese). In: 15th conference of  Japanese Society for the study of Myofascial Pain Syndrome.).

5-3 The difference between hydrorelease (HR) and hydrodissection (HD)

HD and HR are similar in that local anesthetics are not employed. The fundamental differences between HD and HR are shown in the below table and figure. 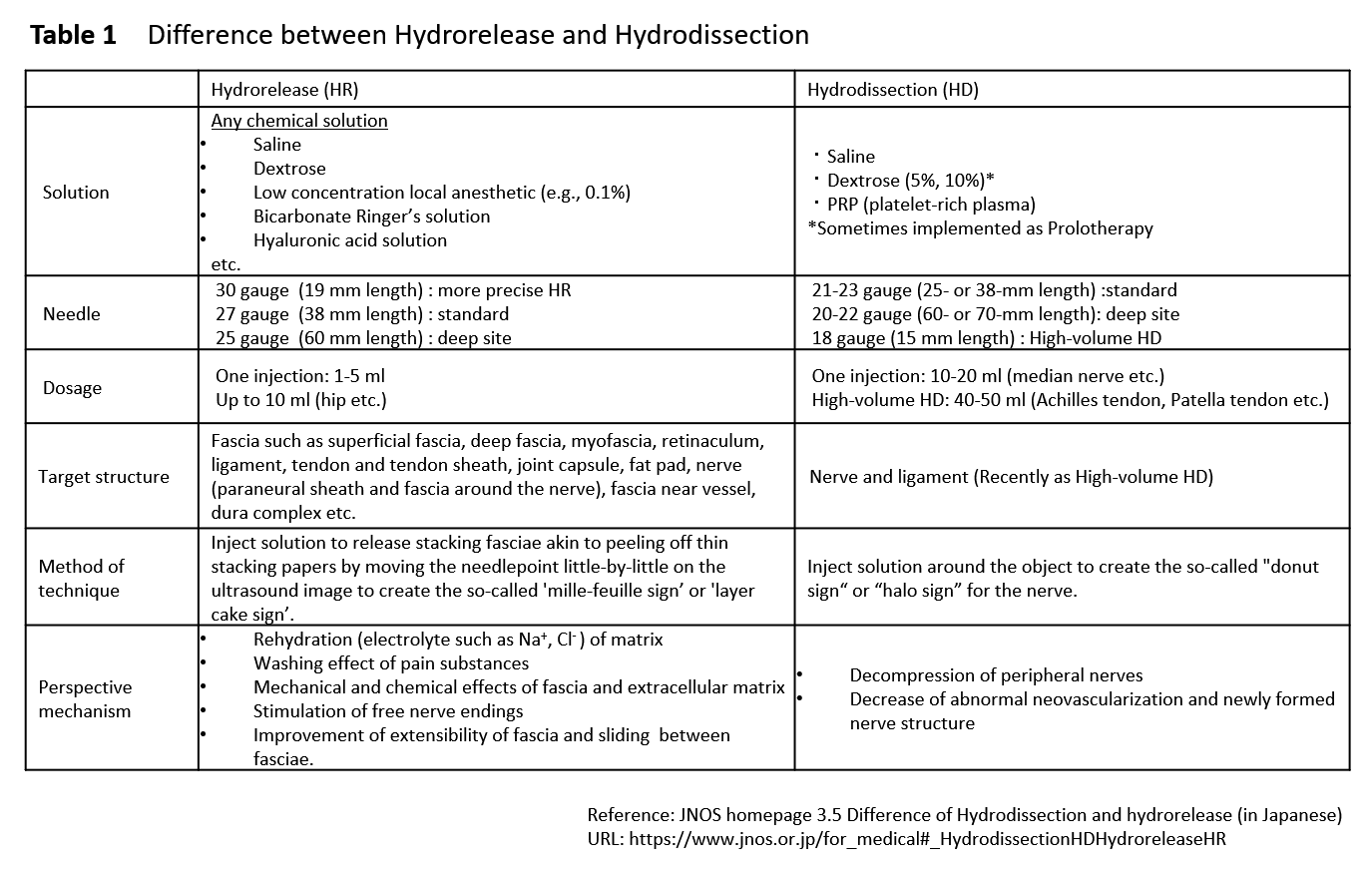 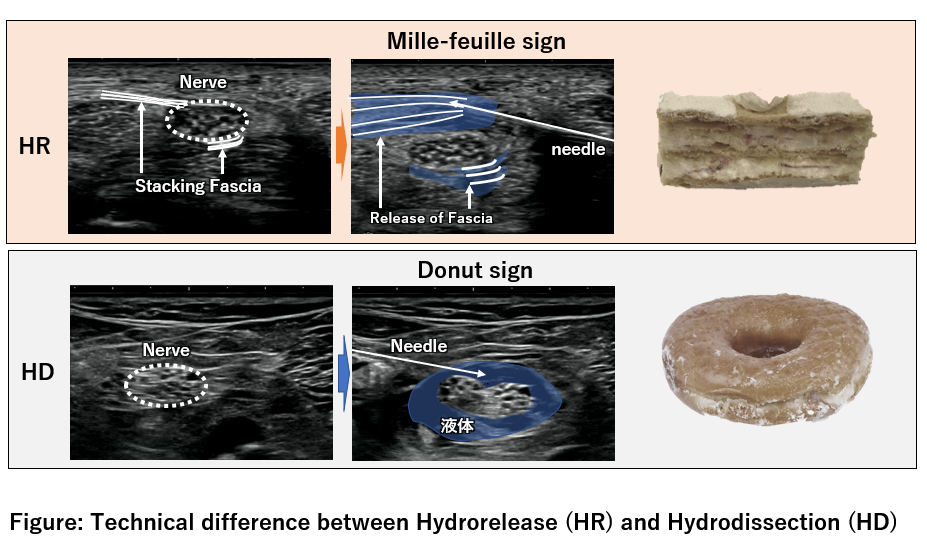 Below are some typical techniques for ultrasound-guided fascia hydrorelease(injections)

In the non-surgical orthopedic field, various treatment techniques such as local treatment, exercise therapy, life movement guidance, pharmacotherapy, and cognitive behavioral therapy are handled in a complementary manner in many occupations. JNOS hopes that fascia is logically integrated with traditional Western medicine to deepen medicine further. 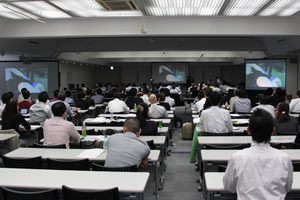